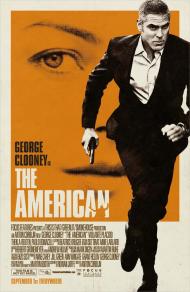 George Clooney in The American.

The American is a thinking film.  Not because it is at all cerebral, but because you, the audience member, is forced to fill in the many blanks.  There is no background given for Jack, or details of what his actual job is.  He is an emotionless void with some tattoos that may have a military origin.

The movie opens with Jack in a scenic cabin in Sweden.  He and his female companion get attacked and three people end up dead at the hands of Jack.  He contacts his boss and decides to lay low in a small northern Italian town.

He gets an assignment by a woman whose hair color changes every time they meet, to build a specific gun for an assassination.  A suspicious blonde guy shows up and seems to be wherever Jack is.  Jack tries to keep to himself, but ends up making friends with a local priest who has a secret of his own.  He also frequents a particular prostitute, Clara.   Through the priest and the prostitute, Jack comes out of his shell and learns to feel again.

The American is sparse on action.  It opens with a quick shoot out, has a chase in the middle, and ends on a quick climax.    The tension in the film comes from Jack not knowing who or what to trust.  Many scenes involve Clooney looking around, expecting something to happen.  Too often nothing does, and thus the pace of the film seems a bit slow.

The opening scene is key to the rest of the movie so pay attention.   The question to concern yourself with is who is the girl with him?  I cannot say more but again, the movie only hints at what is going on.  Nothing specific is ever established.  The American is definitely a movie to see with someone else so you can talk about it later. 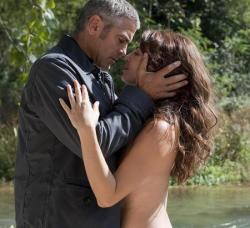 George Clooney and Violante Placido in The American.

The pacing is rather slow but since The American is only an hour and 45 minutes long it didn’t bother me much. The story of a hit man searching for redemption has been done many times before, so it lacks in originality. Clooney brings a bit of gravitas to the part and with the story taking place almost entirely in Italy it feels like a foreign film.

You do have to pay attention to follow the story but it isn’t all that complicated. As Eric said, it has some suspense and tension but it isn’t really an action movie. It is more of a love story between a hired assassin and a prostitute. Clooney engages in some fairly graphic sex.

George Clooney has the charisma of an old time star. This is the type of role I could easily picture Cary Grant playing later in his career. Clooney is in nearly every scene and completely dominates the movie. He is aging gracefully like a fine wine.

There is one really good action sequence. Clooney kills an assassin that is trying to kill him. The guy attempts to get away in a car and Clooney chases him through the narrow, winding Italian streets on one of those little European motor scooters. He quickly and efficiently dispatches the guy. The scene shows just how good Clooney is at his job. The poor guy never stood a chance.

The story is all about redemption. Through his relationship with the prostitute Clooney searches to cleanse his soul, much as the priest has spent a lifetime making up for a mistake in his past. The ending is ambiguous, allowing the viewer to decide the final outcome for themselves. I was never bored watching The American but it could have been much better. 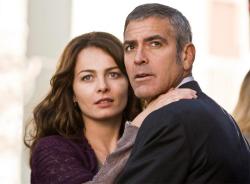 George Clooney and Violante Placido in The American.

This is a beautifully made movie with a subdued but powerful performance by George Clooney. I think part of the reason that it divided audiences upon its release is because if you go back and watch the trailer for it you will see that it was marketed as an action movie. Every scene in the preview features either sex or violence, setting the tone for a very different movie than the finished product.

Normally I am the first to complain when a movie is too long, but I didn't mind the length of this one at all. I do find that I enjoy slower paced movies better at home than I do in the theater, so perhaps that helped. The film is so beautifully shot and Clooney's performance is so subtle that it kept me watching despite the lack of action.

Even though there isn't very much real action, there is an underlying tension that runs throughout the story that also kept me watching. Following Clooney's actions in the opening scene, which features one of the coldest acts by the protagonist of a film ever, you know that there will be consequences. I didn't expect it to end any other way than it did and I wasn't disappointed.

Patrick, I agree with your comparison of Clooney and Cary Grant. For sheer star power and class, Clooney will never match Grant, but he's the closest thing we have to an old time male movie star working today. What's great about this part is that he doesn't rely on that star power. He's performing as an actor, not a star, which just makes him even more of one. I'm not always his biggest fan, but I do admire him as a performer.

This won't be a movie suited to everyone's tastes and it is important to know going in that it's not an action movie. Perhaps having that expectation is why I enjoyed this more than you Eric.