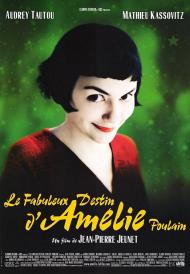 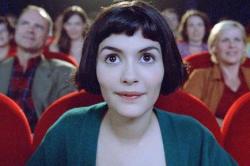 Amelie is sweet and delicate, like a nice glass of white wine. This is a French film, and like the country's reputation, it is about love and how sometimes you need help in obtaining it.

The movie starts literally at the moment of Amelie's conception. She is born to two unaffectionate parents. They never touch her and thus she gets excited whenever her dad does a monthly physical exam on her. She gets excited hoping he might hug her. He believes her accelerated heart rate is a defect and thus she is home schooled.

Amelie, grown up, is an introverted waitress in a Paris cafe. One day she finds a tin of objects that obviously belonged to a young boy once. She returns it to the, now middle aged owner, without him knowing it came from her. She is so touched by his reaction that she decides to help other people.

Without anyone knowing, she attempts to get a coworker and a regular customer together. She torments an abusive grocery store boss, because he picks on his handicapped employee. My favorite project of hers, though, is the way she gets her father out of his rut and out of his house.

One day Amelie meets someone and it is love at first sight. She is good at helping other people with their problems but she has no idea how to handle her own. As I wrote, this is a French film and love just needs a little push.

Besides being a feel good movie, it is also often quite funny. In one scene, Amelie is looking out over the Paris skyline wondering how many people are currently having orgasms. It then shows you exactly how many. The last orgasm is quite hilarious.

This film is beautifully shot and briskly paced, yet the best thing it has is the aptly named Audrey Tautou. Aptly named because she looks so much like a young Audrey Hepburn. Tautou, like Hepburn, carries herself in front of the camera with demure class and radiates her charm with a mere glance or smile.

The movie is book ended by little events that have nothing directly to do with the plot. What they illustrate is that little events are happening all around us that are causing someone else to do something. We affect each other's lives directly and indirectly. At times, we could all use a little Amelie. 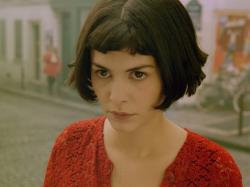 Everything about Amelie is designed to make you feel good. From its playful humor to its charismatic star, the movie makes you happy. Even the color scheme is based around a soothing shade of green.

Like Eric, I found the humor to be one of the best parts of the story. As he alluded, the way in which she gets her father out of the house and into the world by using his gnome is ingenious and laugh-out-loud hilarious. The offbeat narration in which we learn small, intimate details about supporting characters, adds a touch of surreal, almost Pythonesque humor.

And again agreeing with my brother (Wow! Twice in one review), I found Audrey Tautou to be the brightest spot in this already bright movie. Small in size, her pixie-like personality fills the screen as she spreads her magic among those around her.

The movie really gets going with the news broadcast of the death of Princess Diana, but rather than being the impetus of the story it merely causes Amelie to drop a cap that leads her to discover the metal box. It shows that the big events to which we have no personal connection, while making headlines, can never touch us in the same way as the tiny ones that are going on in our own lives do.

The magical thing about Amelie is, unlike so many supposed feel-good movies, it actually does leave you smiling.

In the fall of 2001, shortly after the horrific events of 9/11, a coworker of mine told me about this wonderful new French movie called Amelie. About a year later she came over for a movie night and she brought this whimsical little film for us to watch. I was thoroughly enchanted by it but for whatever reasons I never got around to reviewing it for this site. Several years later, to my delight, Eric did review it, followed a few weeks later by Scott. Well for the past 8 years I have been meaning to do likewise. Until today I had never managed to do so. Here then, many years late, is my take on Amelie.

I am in 100% accord with my brothers on this one. Amelie is one of the most charming feel-good movies of all time. I also agree that Audrey Tautou is wonderful in the title role. A part she very nearly didn't get. Jean-Pierre Jeunet wrote the screenplay with Emily Watson in mind. In this original draft Amelie's father was an Englishman living in London. However, Watson's poor French plus her conflicting commitment to the movie Gosford Park (which was, ironically, the movie we saw the only time I ever went to the movies with the very same coworker that recommended Amelie) led to her being replaced with Audrey Tautou. A stroke of good fortune as it is impossible now to picture anyone else in the part.

Scott mentioned the soothing shades of green many scenes are shot in. Other scenes are in vivid shades of yellow or red. The film's color palette was inspired by the paintings of Juarez Machado, a Brazilian artist. It is very easy on the eye and the scenes shot outdoors in Paris are quite visually enchanting.

Amelie is both touching and funny. The humor is quirky, such as Amelie's suicidal pet fish Blubber. The script is also quite poignant. Take the man who Amelie returns his childhood treasures to. “Life's funny. To a kid, time always drags. Suddenly you're fifty. All that's left of your childhood... fits in a rusty little box.”

My brothers both mentioned the imaginative manner in which Amelie inspires her father to travel. This was actually based on a series of popular pranks pulled in the 1990s in England and France. In one odd little incident in 1997 (the same year this movie is set) a Frenchman was convicted of stealing more than 150 gnomes as the leader of a group calling themselves Front de Libération des Nains de Jardins, which in English translates as Garden Gnome Liberation Front. A garden gnome has since become the mascot for the internet based Travelocity, which sponsors the reality show The Amazing Race.

Amelie was nominated for five Academy Awards including the prestigious Best Foreign Language Film and Best Original Screenplay. On the big night it went home empty handed however. In the name of constructive criticism my one small complaint is that the second half is not quite as fresh and intriguing as the first half. Although it comes close. Another interesting facet to Amelie is that it has to be one of the only movies where the two romantic leads are never actually shown speaking to each other (other than a brief anonymous phone call).

In short, Amelie is a cinematic delight from start to finish.