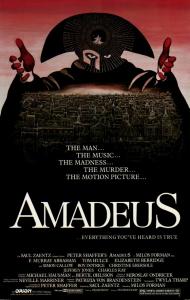 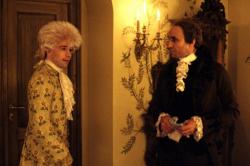 Amadeus was adapted from the Tony winning play by Peter Shaffer. It's a variation of the story from Alexander Pushkin's 1830 play Mozart i Salieri. Directed by Miloš Forman it tells of the life of Mozart as seen through the eyes of rival composer Antonio Salieri. Salieri was a pious man with dreams of glorifying God through his music. But his envy of the obviously more talented Mozart leads to a life of bitterness.

The theme of the story is envy, although the script takes some poetic license with history to make its point. For example there is no historic proof that Wolfgang Amadeus Mozart really laughed with the annoying high pitched giggle he has in this movie. It is essential to the plot, however, as Salieri mentions several times that it is really God laughing at him through the buffoonish Mozart. He can never get over the fact that God chose this boorish man given to doltish fits of laughter to bestow this most miraculous gift of music upon rather than himself, a much more deserving man.

Addressing a crucifix he delivers this speech to his Creator, “From now on we are enemies, You and I. Because You choose for Your instrument a boastful, lustful, smutty, infantile boy and give me for reward only the ability to recognize the incarnation. Because You are unjust, unfair, unkind, I will block You, I swear it. I will hinder and harm Your creature on earth as far as I am able.” He spends the movie attempting to live up to those words.

The script also claims that Mozart was able to write down his complex musical compositions in their finished form without the need for a single correction. This has been called historically inaccurate by scholars of Mozart but it makes for some great dramatic dialogue by Salieri, “But they showed no corrections of any kind. Not one. He had simply written down music already finished in his head. Page after page of it as if he were just taking dictation. And music, finished as no music is ever finished. Displace one note and there would be diminishment. Displace one phrase and the structure would fall.”

The film was shot on location in Prague and Vienna, most notably in the Count Nostitz Theater where several of Mozart's operas had debuted some two centuries earlier. Amadeus was nominated for an impressive eleven Oscars, taking home eight of them including Best Picture, Best Director and Best Actor for F. Murray Abraham (winning over Tom Hulce's Mozart). Murray is brilliant in the part but surely Hulce deserves credit for learning to mime playing the piano so cleverly. He reportedly practiced for four hours a day during rehearsals for the movie.

The director's cut on the DVD restored footage that was excised from the original theatrical release. This three hour period piece includes several scenes of Mozart's operas being performed with choreography by the legendary Twyla Tharp.

Although the overall tone is somber, what levity there is comes courtesy of Mozart himself. The most famous scene is where Mozart first meets the Emperor. Salieri spent hours composing a “March of Welcome” for the occasion. Mozart listens to it once and is able to play it from memory. He offhandedly remarks, “That doesn't really work, does it?” before improvising improvements to it and transforming it into the "Non più andrai" march from his opera The Marriage of Figaro. Mozart finishes this impressive display of talent with a gleeful giggle while Salieri turns three shades of green with envy.

Amadeus takes a rather scholarly highbrow subject and, not only makes it accessible to the masses, it also turns it into a highly entertaining movie.

Tom Hulce and Elizabeth Berridge in Amadeus. What a shame women no longer wear these kind of dresses.

I partially agree with Patrick that Amadeus is accessible to the masses. Whether you watch the three hour director's cut or the original cut of 160 minutes, you are in for a long watch. As the entire soundtrack is filled with classical music, as expected, it helps if you have an appreciation for it. The real challenge is that the plot is rather slim for a film with such a long running time. It simply boils down to that Salieri cannot get past his jealousy over Mozart's talent.

Salieri spends much of the film demonstrating one of humanities greatest and most futile emotions, jealousy. He wants nothing more than to be great. I once explained to my baseball loving son that the minor leagues are filled with players who have one of two abilities, natural talent or determination, while the majors is filled with guys who have both. Salieri most certainly has determination, as he dedicated his life to composing, yet he did not have the natural talent of Mozart. The resolution of the film is Salieri coming to terms with that he is in fact mediocre. It is not an entirely fulfilling conclusion.

The best scenes are when Mozart makes fun of Salieri, such as when he imitates an onlooking Salieri, and ends with a farting sound. My favorite piece of dialogue is when Salieri, with anticipation of approval, asks Mozart, "Did my work please you?" Mozart briefly hesitates and responds, "I never knew that music like that was possible!" A nervous Salieri, says, "You flatter me." and the blunt Mozart corrects him with, "No, no! One hears such sounds, and what can one say but... "Salieri." "

As Patrick wrote, the acting is all around well done. However, with a twist of art imitating life, F. Murray Abraham gets the most screen time as he tells the story in flashback, and like his character getting lost in the shadow of someone else, the film is stolen by Tom Hulce as Wolfgang Amadeus Mozart. After watching the film, Hulce's performance (mostly his laugh) will stay with you long after you have forgotten who played the part of Salieri. 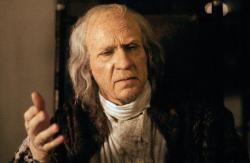 Patrick mentioned some of the movie's inaccuracies, but he skipped over the most important one, which is the central plot device of Salieri being a mediocrity who was driven mad by Mozart's genius. Salieri was a respected composer, who, to use Eric's baseball metaphor, may not have hit like Babe Ruth, but was still an all-star. There may have been a certain amount of professional rivalry, but there's no evidence of any personal animosity and even some evidence of the opposite, with Mozart writing warmly in his diary of Salieri's compliments regarding "The Magic Flute". There are many other inaccuracies as well,but to be honest, they'll really only affect your enjoyment of this movie if you're a Mozart scholar.

The method used to make this movie accessible is by portraying Mozart as the 18th century equivalent of a rock star. He drinks, carouses and has a crude sense of humor. While we can't accurately know what Mozart's laugh sounded like, we can know what made him laugh and on this point the movie may be onto something. The title of one of his tunes is "Leck mich im Arsch", which he reportedly wrote as a party piece for friends. The literal translation of the title is, "Lick me in the ass". His genius is shown, but his success and lifestyle is shown in a way common to modern musical star's biographies. He found success early, partied hard and died young.

I don't agree with Eric that Hulce steals the movie. He's great as Mozart and his is the flashier role, but Abraham is equally fantastic as Salieri. The seriousness of Abraham is nicely counterpointed by the silliness of Hulce. They make a great match for each other and I wouldn't complain if I'd learned that either one of them had won the Oscar.

The look of the film is absolutely gorgeous. Vienna in the 1700s was a gaudy place if you were part of the power elite and this movie shows that quite well. The costumes, the wigs, the ornate homes and furniture are all a treat for the eyes. And speaking of treats, the women of the era certainly weren't shy of displaying their bosoms, something that Amadeus' wife does quite well.

This is a long movie and having watched both the original and director's cut, I have to say that you'll do just fine with the original. The extra scenes add little except to the running time. The original cut did win the Best Picture Oscar after all. Either version though will provide you with a fascinating look at genius, madness and the jealousy that borders between them.