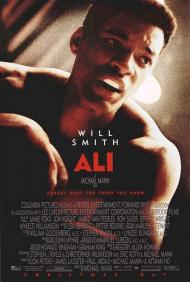 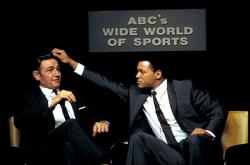 Jon Voight and Will Smith in Ali.

Ali follows Muhammad Ali through all the big events of his life. Mostly it follows him through all of his different relationships with many different people. He was married several times to distinctly different women. He betrayed his father by changing his religion and name. He was friends with Malcolm X. Yet his most entertaining relationship in the film is with sports caster, Howard Cosell. Their banter and conversations are the brightest spots in the film. Cosell would ask Ali tough questions like how can the world champion be broke. Ali, in return, could distract Cosell by commenting on the man's toupee.

Ali was the first major sports celebrity to demonstrate that when it comes to public relations, a personality can be almost as important as how you play your sport. He was entertaining in interviews. He was the inventor of athletic trash talk. With all of this boisterous character you would think the creators of this movie could have made Ali an interesting character. They don't.

Ali lived through some turbulent, eventful times. This movie shows them all. Yet, at no time in the film did I ever get an inkling as to his motives. Why did he become a Muslim? Why did he fall in and out of love with all of his wives? Will Smith does a good impersonation but never lets us see what is really going on with this character. Too often we just see Ali as a serious, intense person who rarely shows emotion. When he finds out someone close to him has sold his championship belt he simply keeps a straight face. He cries when he hears Malcolm X has been killed. Is it because he was once his friend or is it because Ali had turned his back on him? The movie never says. The only time we see Ali's famous charm is when he is trash talking his opponent or talking to Cosell.

This two and a half hour film is bogged down by two things, endless montages, and fight scenes. I know, he was a boxer, but no one is watching this movie for the boxing. If you want to see that, I am sure there are old documentaries on the real Ali's fights. I watched this life story to see why Ali was one of the most colorful characters in sports history. This movie covered the life with out ever uncovering the why.

This film could have been great if it had simply centered the whole thing around a single relationship. Why did he abandon his father's raising? Why did he become a Muslim? Why did he marry the women that he did? Did he have regrets? This movie gets lost in trying to cover too many people who came into Ali's life. The one thing this movie emphasizes about Muhammad Ali is that he barreled his way through life playing by his rules. Frank Sinatra's 'My Way' could easily be Ali's life theme song. But again the movie never says why. 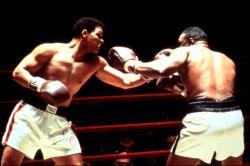 Will Smith in Ali.

I'm just old enough to remember hearing about some of Ali's last fights. What I remember most about him is bragging, boisterous talk before each fight when he was interviewed. He was funny and witty and arrogant as hell, but in a very likable way. For such a colorful and well liked personality, Ali the movie is very dark and colorless.

I agree with Eric that the movie skims the surface rather than prying into the motives of its characters. There's a whole bunch of action going on without, at times, any explanation for why. I think you'd have to know a lot more about Ali than I do to really pick up on the nuances of this story.

It is also way too long. Clocking in at nearly 2 hours and 45 minutes, I couldn't help but think, especially near the end, that so many scenes should have been trimmed or dropped all together. For example, the night of the big 'Rumble in the Jungle', there is a scene in the office of the President of Zaire where some officials tell the President that the eyes of the world will all be on Zaire tonight. It's a short scene, but why is it there? We already know that the fight will be a huge event and the President is not a character in this movie. That one short, needless scene is his only appearance. Another scene, also near the end of the movie, shows Ali jogging and suddenly people start running along side him and chanting his name. Okay, no problem there, but the scene drags on and on for what feels like 10 minutes. For any movie to be over 2 hours, there has to be a very good reason, and I just don't think there is here.

One thing I do disagree with Eric over is the inclusion of the fight scenes. Seeing as this is a movie about one of the greatest boxers of all time, I actually expected that there would be more boxing scenes and readily enjoyed the ones that were included.

There are some good performances in this movie. Jamie Foxx is almost unrecognizable as the drunken trainer who sells Ali's Championship Belt for $500. So many of the performances though, even Smith's as Ali, feel more like impersonations rather than acting. Everyone is working so hard to be the person they're playing that all spirit or spontaneity is sucked out of their roles.

In the end, the movie is just too long, uninspired, and colorless. A sad tribute to such a colorful personality as Muhammad Ali.

Will Smith and Jamie Foxx in Ali.

Ali is yet another movie I missed the first time around. Sometimes it can be interesting seeing a movie for the first time many years after its initial release. Will Smith does a decent acting job as Muhammad Ali but not a great one. I agree with my brothers about the script. It never delves beneath the surface of this charismatic yet enigmatic man's motivations. And the story is bloated and too long.

Smith looks the part and handles the boxing scenes with realism and style. He is good in the scenes where he trash talks, imitating Ali's rhythmic sing-song style of speech and swaggering bravado. But in the quieter moments he seems less sure of himself. He relies too much on a vague angry expression on his pretty face. Eric is right about the script never lifting the veil on his private persona. All we get is the iconic image.

I'm on Scott's side as far as the boxing scenes go. They are some of the most realistic ever captured for a motion picture. The men playing Ali's famous opponents all had boxing experience. In fact Charles Shufford, the guy that played George Foreman, was in real-life a 235 pound heavyweight with an impressive 17-2 record. He was allowed to hit Smith as hard as he could with the one stipulation being that he didn't knock the star out. When you see Ali up against the ropes getting pummeled, you are seeing Will Smith taking punches from a professional boxer.

Of all the cast I was most impressed with Jamie Foxx. He proves his acting chops as Ali's drunk but ultimately loyal trainer. He would soon eclipse Smith in terms of his respect as a serious actor and, of course, won an Oscar playing Ray Charles a few years later. Jon Voight, unrecognizable under all the makeup, has Howard Cosell's famous speaking voice and style down pat but to be honest it feels more like an impression than a characterization.

Muhammad Ali was one of the most iconic figures of the 20th Century. Ali does a decent job of showing his place in the world's imagination. He wasn't just a sports hero, he was a prominent civil rights figure during those tumultuous days of the 1960s. The trajectory of his life and career is the stuff of legend and his story is ripe for a great movie but this one isn't it.