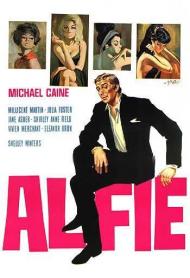 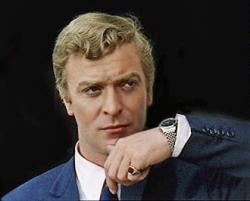 Alfie is movie that is both out of date and yet ahead of its time. Its depiction of swinging sixties culture is historical and what once seemed risque, is now rather tame. However, it features an abortion scene that you would never see in a movie today (and wasn't included in the 2004 remake).

Regardless of how well you think it has aged, Michael Caine gives a brilliant and timeless performance in the central role, adding layers to a seemingly shallow character, often with just a look. Several times he says one thing when meaning the exact opposite and Caine is able to bring that across so that we are able see how Alfie feels when he seems oblivious himself.

Alfie is a single man in London, who sees women as beings who are there to serve him and bring him pleasure before being tossed aside for another. He sleeps with a parade of them; some married, some single, some ongoing relationships and others simply one night stands. He rarely uses the words "she" or "her", but instead uses the word "it" when talking about and to them. From a modern, post-feminist perspective his behavior is more shocking today because of this attitude rather than all the sex he has, which would have been the more shocking when it was released.

A more cynical person than I might say that the women he sleeps with let him get away with treating them as he does, but to that I would say, just because a person lets you mistreat them, doesn't make it the right or honorable thing to do.

Although Alfie seems to be having a nice little time, several events force him to take a more serious look at life.

First, one of his women becomes pregnant and gives birth to a son. While Alfie remains unattached to the mother, he becomes besotted by little Malcolm, although he refuses to admit it out loud to anyone. When Malcolm's mother marries another man so that Malcolm can have a real, fulltime father, Alfie is haunted for the rest of the movie by memories of his son, even having symbolic dreams about him.

A health scare sends Alfie to a country hospital, but this barely slows him down, treating the nurses as his personal harem. He makes a friend while there, but casually sleeps with the friend's wife when back for a visit. This leads to the most dramatic event in the film, when the resulting pregnancy is aborted. Given that abortion was illegal in 1960s England, it has to be performed in Alfie's flat, by a back-alley abortionist. Alfie's tearful and shocked reaction to the aborted fetus pulls back the mask Alfie keeps over his feelings, even if it is only for a fleeting moment. I have difficulty believing Alfie's pro-life speech afterwards would ever be allowed in a mainstream Hollywood film today.

Second billed Shelly Winters has a small, but crucial part as the woman who's as free with sex and attitudes towards the opposite sex as Alfie. She, of all the women, is the only one who comes out on top in her relationship with him.

Caine received his first of his six Oscar nominations for this role and it was a well deserved nomination. He appears in every scene, often breaking the fourth wall to reveal his inner-thoughts and to comment on what is happening. He plays Alfie as selfish and cavalier, moving through people's lives like a bull in a china shop without a concern or care for anyone's feelings but his own, and yet somehow still manages to remain, at least superficially, likable and charming.

You could call Alfie a dated film, but I prefer calling it a classic instead. 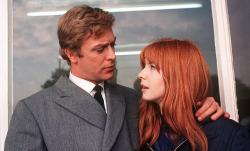 He is incredibly sexist, and that makes the movie all the more unique and entertaining. "My understanding of women only goes as far as the pleasure. When it comes to the pain I'm like any other bloke - I don't want to know."  He is at least honest.  "I've never told her that I love her - except at those times when you've got to say something for appearance's sake."

When it comes to women, he is very cold.  "I don't want no bird's respect - I wouldn't know what to do with it."  He is not without feelings though.  He spends lots of time with his son Malcolm.  Speaking of him with pride, "He's as sharp as a needle."

What Alfie lacks is honor on any level whatsoever.  When he finds out the mother of his child has been proposed to by another man he says, "You better marry him.  You got a young bastard in there to think about."

It is credit to Michael Caine's talent and charisma that he plays such a self centered prick, yet you still find yourself liking him.  Alfie is like a little boy who does not want to grow up.  He is having fun playing with his toys while desperately avoiding responsibility.  He throws hissy fits and gets jealous.  He expects to be treated like a husband, having his girlfriends cook for him and always be there for him, while he never reciprocates.

He is eventually compelled to grow.  The abortion forces Alfie to step outside himself.  He feels pity for someone else for the first time.  He confesses to having murdered the infant, thus taking responsibility.  Ruby gives him a taste of his own medicine.  He learns a few things but is still a bit confused by it all and never quite gets the comeuppance he deserves.  "So what's the answer? That's what I keep asking myself - what's it all about? Know what I mean?" 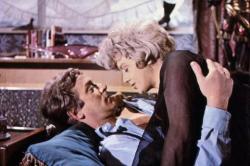 Alfie is a textbook example of a fairly common personality we have all met. You know the type that justifies their own completely selfish behavior by telling themselves that they are just doing what everyone else is doing, namely looking out for number one. They never invest any genuine emotion in another person for fear of being hurt or rejected or simply out of not wanting to give up the comforts and conveniences of their lifestyle. There is nothing worse in their minds than being a “sucker”.

This is best exemplified in the scenes where Alfie tries to talk the man he befriends at the hospital into seeing life as he sees it. Alfie then proceeds to sleep with the man’s wife, almost, it seems, as a means of justifying his own cynical views on life. Here’s how he rationalizes it… “Well, what harm can it do? Old Harry will never know. And even if he did, he shouldn't begrudge me - or her, come to that. And it'll round off the tea nicely.” What a pal this guy is.

Michael Caine is brilliant in the role. He somehow manages to make this selfish asshole charmingly likable. His asides to the camera (shades of Albert Finney in Tom Jones from a few years before) give us insight into his reasoning and motivation and add a quirky British sense of humor to the movie. There is one scene in particular at a pub where a brawl breaks out due to Alfie that is quite slapsticky. This scene stands in stark contrast to the abortion scene that precedes it.

The rest of the cast is good as well. Vivien Merchant (making her theatrical film debut) is especially convincing as Lily, going through the horrors of a back alley abortion. Shelley Winters as Ruby gives Alfie what comeuppance he gets by telling him she enjoys her new boy toy better simply because he is younger than Alfie. This comment points the way towards Alfie’s future and it isn’t a pretty picture. He is destined to be a very lonely old man and part of him, at least, knows it when he says at the end that he’s lost his peace of mind.

I can’t finish this review without mentioning the classic theme song. It is one of the most appropriate themes ever written for a movie with its haunting melody and evocative lyrics that echo Alfie’s last lines. The original UK release featured the version sung by Cilla Black. For the American release Dionne Warwick recorded the song but her rendition was replaced at the last minute by Cher’s take. I prefer Barbra Streisand’s definitive live version from her New Year’s Eve 2000 concert in Las Vegas.

I agree Scott, Alfie is both a product of the swinging sixties and a timeless movie classic.