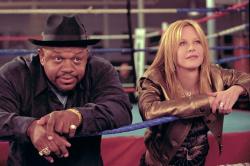 Charles Dutton and Meg Ryan in Against the Ropes.

After having its release date pushed back multiple times, nearly a year after it was originally scheduled to open, Against the Ropes finally sees the light of day. Since a floating release date is often an indication of a problem movie, I watched this one with some preconceived skepticism. To my surprise however, it turned out to be a not so bad movie with two skilled performances from its leads. It is by no means great, but certainly better than I expected.

The plot is based loosely on the life of Jackie Kallen, a female boxing promoter. As the movie begins, Jackie (Ryan) is working as an Executive Assistant to a Cleveland stadium manager. Having grown up around boxing her whole life, she's something of an expert on the subject. When one night she angers the local big shot promoter (Shaloub) by claiming she knows more about boxing than him, he gives her the chance to prove it by offering to sell her a boxer's contract for $1. Of course there's a catch. Her new boxer is a drug addict, as she discovers when she goes to his apartment for the first time. However, when Luther Shaw (Epps), shows up at her boxer's home to collect some money, and instead ends up beating up Jackie's boxer and another man, Jackie thinks she's found a fighter she can promote.

There is of course, nothing new going on here. The underdog boxer fighting his way to the top is a movie standard. And twenty-five years ago, Barbra Streisand showed us a female boxing promoter in The Main Event, although that was a comedy and this is not.

What this movie does have is Meg Ryan, who gives a very strong, and "un-Meg Ryan like" performance, and Omar Epps, who manages a nice turn, despite being forced into playing something of a cliché. The best moments are their scenes together, which, unfortunately, are too few. Their relationship is the movie's emotional center. One of the brightest moments comes when, after a few successful fights, Jackie is able to set Luther up in a new apartment and they share a moment. Not a romantic one, but a human bonding one. There should have been more scenes like that one.

Charles Dutton (most recently seen as Halle Berry's husband in Gothika), makes his directorial debut with this movie, and also co-stars as another cliché, the broken down trainer. His direction is competent; the fight scenes are done well and fairly quickly. He wisely knows that the real drama is outside the ring.

I'm sure that the real Jackie Kallen is a gutsy woman. It's too bad this movie didn't follow her lead and take a few more chances, instead of relying on clichéd characters and tired plot devices. But thanks to Ryan and Epps, especially when they're onscreen together, the movie manages, at times, to rise above its weaknesses. 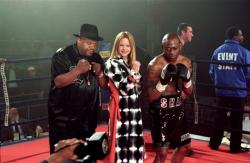 Charles Dutton, Meg Ryan and Omar Epps in Against the Ropes.

Scott, I know you have a soft spot for Meg Ryan but this movie is bad. It is filled with stereotypical characters serving up cliché ridden melodrama. There really isn’t an original idea in the entire movie. We’ve seen the underdog boxing story a million times before and done much better.

The angle of the female boxing manager in the testosterone driven world of professional boxing is where the movie tries for originality, but as you mentioned Scott, Barbra Streisand did it back in the 70s. The biggest difference is that The Main Event knew it was a comedy while Against the Ropes elicits unintentional laughs.

Meg Ryan is hopelessly miscast. She was clearly trying to stretch herself as an actress by playing against type. Instead of the adorable, uptight snob she is playing a tacky, tough-talking cookie. She talks with a weird accent that sounds like a cross between Minnesota and the Jersey Shore (the real Jackie Kallen was a Jewish woman from Detroit). Her clothes are atrocious. In one scene she gives a young female fan some advice. “Remember, run in the streets with the big dogs, don’t just sit on the porch and bark.”

Omar Epps does decent work playing a walking, talking cliché, as Scott said. He certainly was in good enough shape to believably play a fighter. I agree that Epps and Ryan create a strangely intriguing chemistry together. The ups and downs of their relationship gives the movie whatever dramatic tension it has, which isn’t much.

Tony Shalhoub plays your stereotypical loud-mouthed male chauvinist and Charles Dutton is the wise old trainer. How original. Dutton’s direction is fine; he just needed a better script to work with. Against the Ropes is bad but not quite bad enough to be entertaining. Not recommended. 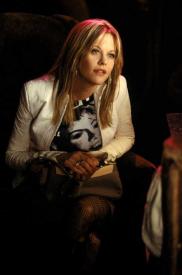 Meg Ryan in Against the Ropes

Yeah, this movie never met a cliché it didn’t like. Look at the scene in the car where Luther, a young black male, is jamming to some hip hop music until white girl Jackie changes the station to some light chick song only to have old black man Felix change it to a blues station. How about if Jackie put a hip hop song on the radio thinking it is what Luther wants to hear, only to have Luther change it to something surprising like a classical or country song? Cue a double take and Luther asking, “What?”

The one time the movie becomes slightly unique is when Luther starts to feel that Jackie is getting more glory than him. It causes some tension between them but seems a bit forced as it comes down to Luther simply wanting more professional attention from Jackie. She then gets an offer from HBO that could lead to the big time. Will Jackie take self-gratification over her personal commitments? The problem being that the movie never takes us to a point where it really matters one way or the other.

As far as Meg Ryan’s performance goes, I think she did an adequate job but I have no idea where her accent came from. I wonder if she did. And who wrote her dialogue? "I'd rather have that kind of kaput than your kind of stupid." The first thought I had when starting this movie was, “Oh yeah, Meg Ryan. What ever happened to her?”

This movie did not end her career, but it was her last attempt at something decent before beginning a self-imposed semi-retirement. In 2008 she explained why she slowed down. “I've been famous since I was a teenager. There are a lot of empty spaces in that. I just feel like I've been filling in the cracks a little bit. I feel very fortunate, very free.” That may be her thoughts on the subject but if you do a google image search you will find that the passing of time has not been kind to an actress whose career was built around being adorably cute. 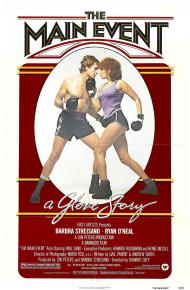