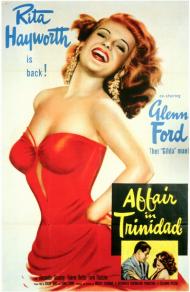 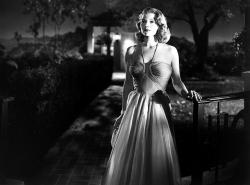 Rita Hayworth in Affair in Trinidad.

After making The Loves Of Carmen in 1948 Rita Hayworth retired from film making. She married Prince Ali Kahn and traveled the world as royalty. There was even a documentary film about her worldly travels. After the marriage crumbled Rita returned to Hollywood. Her first film after the four year absence was Affair In Trinidad. It reteams her with her costar from Gilda, Glenn Ford. Like Gilda, it takes place in a south of the border locale, and Rita does a couple of hot dance numbers. Unfortunately the plot is even more confusing than Gilda.

Glenn Ford plays a pilot, Steve Emery, who arrives in Trinidad with a letter from his brother offering him a job. Upon arrival, he gets the news that his brother has killed himself. Not believing the suicide story, Steve confronts his brother's widow, Chris, played by Rita Hayworth, is helping the local police by going undercover and getting close to Max Fabian. He is the prime suspect in her husband's death.

What frustrates Steve, and the audience, is that Chris never lets Steve in on her plan. She is going along with the suicide story so as to get close to Fabian. Steve is unaware that Chris is just pretending and sees her as a bitch hanging out with the prime suspect. Her reasons for not telling him her real motive is extremely weak. The plot never seems to know exactly where it is going. Fabian and a group of people who work for him are all up to no good, but the movie is never specific about what it is. If Chris would just tell Steve the truth, they could work together and fall in love sooner.  Like Gilda, the back story needed some work.

This movie is all about Hayworth. The studio promoted this film as Rita's comeback. 'SHE'S BACK! With that man from GILDA!' read the movie poster for Affair In Trinidad. Rita looks good in this movie, especially in the dance numbers. However, middle age and some personal problems had begun showing on her face. This would be her last hurrah as a major sex symbol. It was 1952. Marilyn Monroe was about to steal her crown as the reigning sex symbol.

The movie out grossed Gilda at the box office. However, it lacks the sexual tension that made Gilda a classic. Hayworth would go on to make other good movies like Pal Joey and Separate Tables, but Affair In Trinidad is her sex symbol swan song.