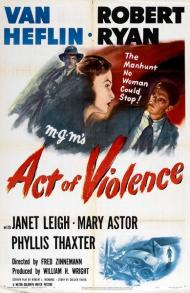 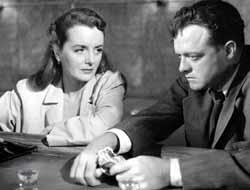 This relatively obscure Film Noir entry from 1948 features a great cast and some real tension. Van Heflin and Robert Ryan are the male leads, both then at the height of their careers. A young Janet Leigh and a middle-aged Mary Astor give good performances. Leigh is Van Heflin's innocent young wife and Astor is a world weary bad woman who's been on the low rent party circuit a few years past her expiration date.

The movie begins with Robert Ryan in an apartment in New York City. He loads a hand gun. Next we meet Heflin and Leigh, a seemingly nice young couple living on the West Coast. He is a successful businessman and she's the perfect young wife and mother. One day he goes fishing and while he's gone Robert Ryan shows up at the house. Leigh innocently tells him where her husband is fishing and he sets off in pursuit.

The intriguing question of the set up is just why did this man travel across the country just to kill this other man?

I won't give that detail away because it is intrinsic to the plot. Let's just say that these two men knew each other during The War, and leave it at that. The story moves quickly, and deals with archetypal themes of guilt and redemption.

Fred Zinnemann directs with all the details and qualities that make up a great Film Noir. Mary Astor is particularly appealing here. What an old pro she was, having started out way back in silent movies. She brings so much gravitas to the role with her innate talent, undeniable presence, and understanding of the character.

A thoroughly enjoyable, if not classic, entry in the Noir genre, with a bang-up finish.