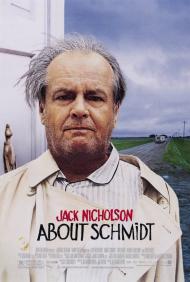 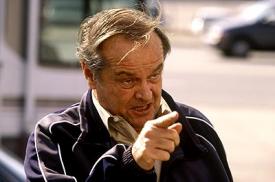 Jack Nicholson as Warren Schmidt in About Schmidt.

About Schmidt is one of the saddest comedies you will ever see. Even in its funniest moments there is a pervasive sense of melancholy.

You get the feeling that long before Warren Schmidt's retirement from a lifetime job in insurance in Omaha, during the opening scene, he was a depressed man. It is not until after the sudden death of his wife of 42 years that he really begins his soul searching in order to find some satisfying point to his life. He is having an end of life crisis.

He begins sponsoring a needy child in Tanzania by sending 22 dollars a month. Along with his check he writes long personal letters that allow him to open up about his dreams, hopes, and failures. It is in these voice-overs that all begin “Dear Ndugu…" that we get as close to the familiar Jack Nicholson as the movie gets. During most of the movie he is a model of restraint, successfully hiding behind this much less flamboyant persona than we are used to seeing him play.

Schmidt decides to visit his daughter in Denver, with the secret plan of breaking up her impending marriage to a guy he feels is not good enough for her. He heads out in the brand new extravagant mobile home he bought at the insistence of his wife. Along the way to Denver he makes a few stops to see places that were important to him as a child. In one humorous scene he finds that where his childhood home stood is now a tire store. He goes inside and tells the guy working there that “my bedroom used to be right over there." Much like the rest of the movie we are given a funny moment inside of a larger poignant situation.

After his arrival in Denver the movie heads for its conclusion. But not until Kathy Bates, as the mother of the groom, gets to steal a few scenes. First with her loudmouthed swearing at her ex-husband and then in one of the bravest moments ever played by an actress over fifty, when she jumps unabashedly naked into a hot tub with Schmidt.

The final scene is the one that will clinch a nomination, if not a win, for Mr. Nicholson. Back home after the wedding he finds a letter from the Nuns who are raising his foster son, Ndugu. Along with the letter is a picture the boy painted for Schmidt, who breaks down into sobbing tears… 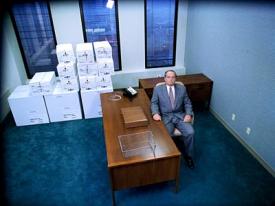 Jack Nicholson in About Schmidt.

About Schmidt puts Jack Nicholson in a different role. So often he plays the over the top cussing hard ass. No one swears as well as Jack. Here he is very subdued, but none the less effective.

Schmidt is utterly lost in a world he doesn't recognize. When he had a wife and a job his time was dictated to him. Complete chaos enters his life when he is left to his own devices. His house falls into mess. He attempts to find a new purpose to his life by visiting some places important to him. His sad visit to his daughter is fruitless. He can't change her mind about the marriage and they reach no new level of understanding. His daughter is as distant at the end of the movie as she was at the beginning.

I found this movie to be terribly sad. It is meant to be somewhat of a comedy, but Schmidt is alone in his world. Schmidt's best relationship ends up being with a child from another country who can't even read his letters. The sad scene at the end of the movie, that Patrick mentioned, is so devastatingly depressing because Schmidt comes to realize that the only person in his world that needs him is this child whom he has never met.

On Golden Pond left you feeling that life can still be vital at an old age. Grumpy Old Men says that fun and love can happen at old age. About Schmidt says that we need to be needed when we are old. This is a very touching movie but ultimately it is extremely depressing. 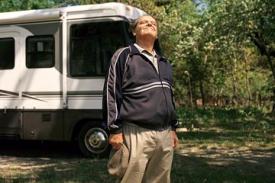 Jack Nicholson in About Schmidt.

Depressing is too mild a word for this movie. While it is, as my brothers have said, very well acted, and also well directed, it is the biggest downer of a movie that I have possibly ever seen. The DVD should come with a bottle of Prozac and a warning label that those with a depressed condition should refrain from watching without close medical supervision.

I agree with Eric that this movie shows that you need to be needed, especially when you're old, but I think it actually goes deeper than that and is saying that you need to do things in your life that will make you needed when you are old. Warren was a very distant father whose daughter is now very distant from him. He is a man whose work was his entire life, unfortunately for him it was the kind of work that you can't really look back on and say, 'Look what I accomplished'. Once his wife dies, he truly has nothing left in his life.

There are some interesting moments of symbolism in the movie. The mobile home that Warren purchased is an Adventurer. He only bought the bigger sized one because his wife chipped in for half of it. Warren would have been satisfied with saving money by only going on half the adventure, but because of her, their adventure was twice as large.

Some movies are well constructed and technically without flaws, but you still have no desire to ever watch them more than once. About Schmidt is like that. In the end, it is just too damn depressing.