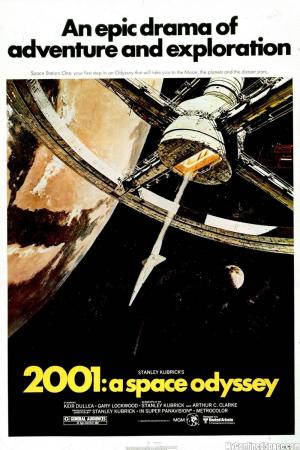 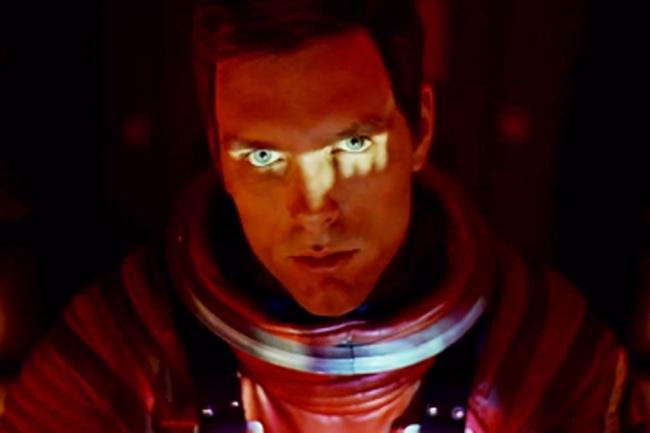 Visually, Stanley Kubrick's 2001: A Space Odyssey is an unquestioned masterpiece. The special effects were not only groundbreaking, but they stand the test of time. With the exception of a couple of small moments, the movie looks just as good today as it did in 1968. In fact, thanks to the high-definition video available to us now, it looks better than it has in years. Unfortunately, it still suffers from a plodding pace and a confusing story that offers no concrete explanations, although many people have tried to come up with some.

The story is told in four long segments and each shows the effects of a mysterious black monolith. It begins at the dawn of man, when a tribe of ape men discover the first one on the plains of Africa. It inspires the leader of this tribe to use the bone of an animal as a tool and a weapon. The story then jumps ahead to the near future where another monolith is discovered on the Moon and which begins transmitting a signal to Jupiter. This leads to the main section of the film, when a ship, infamously controlled by the computer HAL, is sent to investigate the area being signaled to. The final section, triggered by another monolith, is the most confusing, consisting of a psychedelic light show, an ornately decorated bedroom, and a muddled timeline, that eventually leads to the final monolith and the film's tag scene.

Kubrick and author Arthur C. Clarke developed the story together, inspired by Clarke's short story "The Sentinel". The novel by Clarke, was written while the film was in pre-production and it offers the concrete explanations that the film lacks, although Kubrick said in several interviews that the film and the book are two separate entities and that the book shouldn't be seen as the key to the film. He reportedly preferred for the viewer to make up their own mind about the meaning of the film. And Clarke once famously said that if a viewer understood the film with just one viewing then they'd failed as filmmakers. The open to interpretation nature of the story has been dividing audiences ever since. Reportedly, over 200 people walked out of the film's premiere, including Rock Hudson, who supposedly said, "Will someone tell me what the hell this is about?"

Production on the film took several years and the attention to detail was painstaking. The use of real brand names on the devices and appliances in the film (such as Whirlpool, IBM, and RCA), not only provided funding in the way of product placement, but also add to the sense of realism. Even the background elements contain accurate details that are clearly visible in HD. Signs and buttons are properly labeled. Every vehicle and piece of equipment looks as though it could actually perform the function it was intended to. And the fact that this realism was created without the use of CGI makes it all the more impressive. Sure, the hairstyles and clothes look more like the 1960s than the hair and fashions of the the real 2001, but this does nothing to detract from the film's look. Every detail is a feast for the eyes.

The problem with all this detail is that after all of the effort put into the film, Kubrick seemed unwillingly to edit enough of the shots to a reasonable length. Despite reportedly trimming nearly 20 minutes from the film, the length remains a painfully slow 142 minutes. There's simply not enough story here to justify such a length. The initial flight from the earth to the moon, including the stopover at a space station, is a perfect example of a sequence that today would be a tenth of the length it is here. Yes, many of these shots are beautiful and yes, they were and are technically brilliant, but they do nothing to advance the story. The epitome of the filmmaker's indulgence is a relatively brief scene where the lunar module lands on a platform on the moon that is then hydraulically lowered into the interior. Did we really need to see it lowered the entire way? Did we really need to see it lowered at all, is another valid question. Yes, that scene is short, but when you add up all the other similar brief scenes, you end up with another hour that could have been trimmed.

As for the film's much discussed ending, it's not surprising that it became popular on its release for college students to watch it while high. In fact, the film was a critical and financial failure until it began to develop a following among young people, many of whom flocked to late night showings while under the influence. Many have chosen to see the film as allegorical and offer different interpretations to what it all really means. If arguing over vague intentions is something you enjoy, then you'll get more out of this movie than I did. Personally, I think that after taking this very long journey that the filmmakers owed the audience some real answers.

It's not possible to deny the visual splendor and the technical breakthroughs of this film. And the character of HAL, the computer, is a classic one, managing as he does to be sinister and chilling with nothing more than a red light and a creepy voice. However, the glacial pace and ambiguous ending means that while a visual masterpiece, it's a deeply flawed piece of storytelling.